Today’s entry is Indian Summer by Milo Manara and Hugo Pratt. This book is a great example of two creators at the top of their game coming together to let all the kids know how comics are done. The background in this creative relationship helps add to the importance of a book like this. Hugo Pratt was a mentor for Manara as a young creator in his early days of cartooning. Manara’s longer work, the Adventures of Giuseppe Bergman, was very formed and influenced by the guiding hand of Pratt. He even included a character in the story, called HP, who bore a striking resemblance to Pratt. I have a whole lot more to say about Pratt, but I think its best to save that for when I review his Corto Maltese books.

Indian Summer, or in the original Italian – Tutto Ricominciò con un’Estate Indiana, tells the story of a group of pilgrims and their encounters with the local native population. It follows the snowballing effect of disaster when an outcast of the pilgrims shoots two natives that had just raped a young pilgrim woman who had been out picking berries. The story is full of all smut and corruption one could expect from Milo Manara, but it is balanced by Pratt’s fascinating story. The book is rife full of biblical such as the pilgrims camp being called New Canaan and most of the characters having names right out of the bible, such as Elijah. Pratt has a subtext within the story that can be seen as some kind of old testament confrontation between Israelites and Philistines, fighting over the fertile territory. Pratt provides a nice epilogue explaining what happens to the characters over time in 17th century North America, which is accompanied by some gorgeous watercolour sketches by Manara. Apparently the story was created with extensive research on Pratt’s part, into the history of that area and then piecing together his work into a fine narrative.

I am a huge fan of Manara, and this is probably one of his stronger books visually, and it is really neat to see two long time friends, work together in creating an interesting book.

At some point in the coming months, I will have a written interview with Manara to post. Unfortunately, he doesn’t speak English, so I had to rely on a translator to help with the process, but any chance to communicate with one of my comics idols, makes me a happy inkstud. 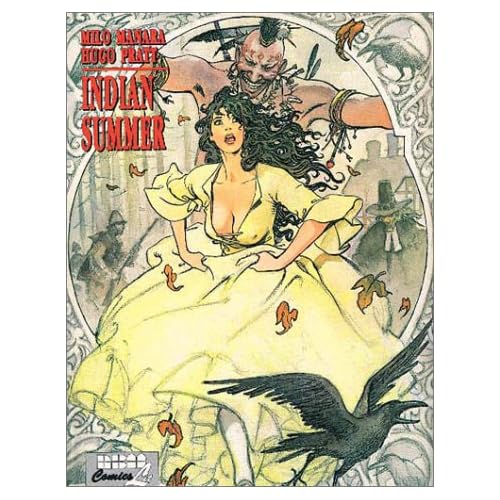