Today i read an oldy that is a goody. I have a long time love and respect for the work of Moebius, but I had never read his Blueberry work. I decided to finally read the first of many volumes of his fine collaboration with Jean-Michel Charlier – Chihauhua Pearl. This book follows the intrepid hero on his journey for a half million dollars worth of confederate gold. Blueberry lives in world very similar to the Leone spaghetti westerns. None of the characters are good people and even the protagonist himself is fault with faults of his own. Moebius takes you through a messy dirty mexico filled with back stabbers, greedy confederate deserters and much more. Don’t expect a western along the lines of Deadwood though.

There are all sorts of little touches of Moebius’s work that he throws in that I love. Blueberry looks obviously filthy and you can see how he is getting more and more run down as the story progresses. His characterization is great, he is not a completely likeable hero, but at the same time, he steers away from being a Han Solo type of anti-hero. He is bit of an idiot sometimes even, which is a nice touch that alot of creators don’t use nearly often enough(except Johnny Ryan, but all of his characters are idiots).

The way the book is put together, it seems that the series was originally published as half page segments in a newspaper, but it doesn’t ruin the pacing at all. I think 99% of webcomics folks that are trying to do extend stories should read this, just to see how a master does it and take extensive notes. I know that this book will be hard as hell to come by, but if you get the chance, do yourself a favor and go hunt it down. I have even seen some Blueberry stuff on ebay for a decent price recently. 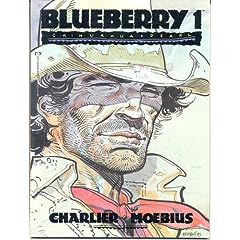