It’s time for a toony Tuesday(sorry, very Canadian reference). I spent most of the day writing for school, so I didn’t get much of a chance to read anything so I am going to review something I read awhile ago. 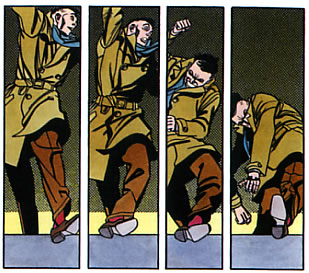 First off, Master Race by Bernie Krigstein. I read this today while working on a paper about literary traditions with a reference to Maus. Krigstein was doing some crazy shit on the page that looks like something that belongs in an issue of Raw. Master Race is an 8 page story from Impact Comics #1 published by EC in 1954. It follows the story o a former commander of a German Concentration Camp that is haunted by his horrible actions while riding a New York subway. Krigstein uses all sorts of odd angels and close ups to capture the despair and fear that character is dealing with when he recognizes another passenger as someone from his past. He also utilizes a really neat cinematic look to slow action right down and then also uses to a similar technique to give the idea of speed and movement on the subway. I don’t think I can accurately describe what Krigstein does with this story, so maybe go read Paul Gravett’s essay on Krigstein, he is smarter than me.

My other review for today is the much anticipated Asterios Polyp by David Mazzucchelli. This is one of the best books that I have read in quite awhile. I know David has been working on this for several years, and it shows. Batman Year One and Rubber Blankets are some of my favorite comics, and I think this will join the stack. I feel like this shows such a progression in technique in styles. His other work, is that of a younger cartoonists and reflects a certain sensability that has shifted with this latest work. Asterios Polyp is a story of love and lonely, balance and chaos and  lastly loss and renewal. The story follows the life of Asterios Polyp, who plays the role of a bit of an anti-hero. Throughout the book, we are shown his new life and his old life, constantly contrasting to show some dimension of change. The old Asterios is kind of detestable, while the new, you want to admire and root for. I am going to avoid too much of a description of the story, and leave that for you when you read it. I am curious of how much of the character is a stand in for Mazzucchelli. Asterios is professor of architecture known for his incredible designs, but not having any of them built, while Mazzucchelli has been removed from comics working on this epic, that he has become a figure that everyone is waiting for something from. There are more little points of comparison and analysis, but I will save that for someone more capable.

The part about the book that I find fascinating, is his use of representation. The past and present both have a unique colour scheme that seem to reflect the state of mind that Asterios is in. The colours he uses are very very close to what Frank Santoro and Ben Jones have been using with Cold Heat and I find it fascinating that both books use the similar hues. But that is something that Frank can analyze, the way he loves to analyze colour. The book also has a great use of representational symbols that show Mazzucchelli really speaking to the strengths of what can be done with comics when pushed far enough. At some points I do feel like I am reading a Scott McCloud book, but he manages to reign in before that can happen. I highly recommend picking up this book when it comes out(june 2).

Until this book does come out, maybe do yourself a favor and go order Rubber Blankets #3 from Last Gasp. Mazzucchelli really deserves to be spoken of, with the same level of respect as guys like Clowes, Ware and Pante.This book will remind all the new fans of alternative comics, just who David is and why he is important.